‘Offences Against the State’ by their very nature immediately attract State attention. Over the last few years there have been multiple incidents that have been reported under this category. Given the propensity of the crime, ‘Offences Against the State’ entail long and harsh punishments. The burden of prosecution in these cases is on the State and it acts as the biggest repeat player in the criminal justice system. Therefore it becomes imperative to study to the role and the responsibility that the State plays in trials of such offences. It is expected that the State would participate in the legal proceedings with the utmost vigour and a sense of priority to ensure justice is done in a timely manner, and the wrongly incarcerated innocent is released at the earliest.

In this blog post we analyse the efficiency and the efficacy i.e. the promptness and the correctness with which the State pursues these matters. For this study we have looked at the data provided by NCRB in ‘Crime in India’, 2015 in Chapter 21 ‘Offences Against the State’, Chapter 4 ‘Disposal of Cases by Police & Courts’ and Additional Table on ‘Data Analysis on IPC Crime-heads Under Various Heads during 2015’.

As detailed in Chapter 21 of Crime in India, 2015, the relevant IPC offences are as follows: –

Table 1: Data recorded by NCRB on ‘Offences Against the State’

NCRB defines ‘True Cases’ (TC) as the summation of Cases which are Chargesheeted and the Cases which aren’t Chargesheeted but a Final Report Submitted (TC = CCS + CNCFR). ‘Chargesheeting Rate’ (CSR) is calculated against the number of True Case (CSR = CCS/TC). The table below contains data on above listed parameters for ‘Overall Cognizable IPC Offences’ in 2015:-

The following Tables lists the data on disposal of Cases by the Police and increase pendency in 2015 in ‘Offences Against the State’ and ‘Overall Cognizable IPC Offences’:-

Table 3: Data on Disposal of Cases by Police

The Case Pendency Percentage for ‘Sedition’ & ‘Others’ is as high as 82.8%, for 153-A & 153-B it is 57.4%, where as for Overall Cognizable IPC Offences it is 28.4%. On comparing the increase in case pendency as given in Table 3.1 we find that the pendency at the end of the year for ‘Offences Against the State’ has increased by 11.77% with respect to the pendency at the year beginning. Whereas, the increase in pendency at the year end for ‘Overall Cognizable IPC Offences’ is 6.91% w.r.t. pendency at the beginning of the year. This is reflective of a relaxed attitude of the State towards the conduct and the closure of investigation in ‘Offences Against the State’. Even with much lesser number of such cases, the pendency percentage at the end of the Police is alarming.

Once the chargesheet is filed by the Police in a case then the trial begins in a Court. The tables attached below contain data on Disposal of Cases by the Courts and the increase in pendency in the year 2015 in the specified offences:-

Table 4: Data on Disposal of Cases by Courts 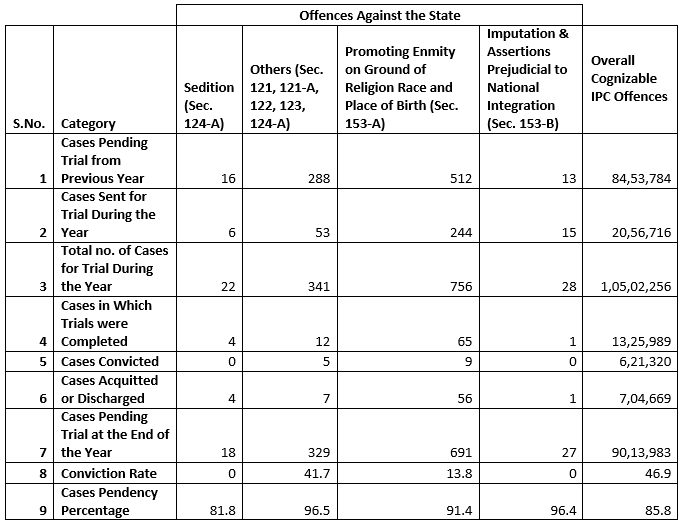 As per Table 4, the trial was completed in 16 cases falling under ‘Sedition’ and ‘Others’. It accounts for 4.41% of the 363 cases sent for trial during the year 2015. Similarly 66 cases under 153-A and 153-B were disposed off by the Courts, which is 8.42% of the 784 cases sent for trial. Collectively, 82 trials under ‘Offences Against the State’ were completed i.e. 7.15% of the total 1147 cases sent for trial. However, the Courts disposed off 13,25,989 cases pertaining to Cognizable IPC Offences i.e. 12.63% of the total number of cases for trial during the year. If we compare the increase in case pendency at the year end w.r.t year beginning then we find that increase in pendency for ‘Offences Against the State’ is 28.47%. However this number for ‘Overall Cognizable IPC Offences’ is 6.63%.

On comparing the performance of the Police and the Courts we observe:-

On the basis of the above analysis we can conclude that the state often goes overboard in Case Registration and levelling of Charges. In the year 2015, 1179 individuals were arrested by the Police for alleged ‘Offences Against the State’, however only 16 persons were convicted by the Courts. With very low disposal rate at the end of the Police and the Courts, the cases tend to get dragged for a long time before a final decision is taken. Given the long investigations, low chargesheeting rate, lengthy trials and much lower conviction rate, it seems the process of pendency itself is used as a weapon of suppression by the State to harass and punish people accused of such offences.